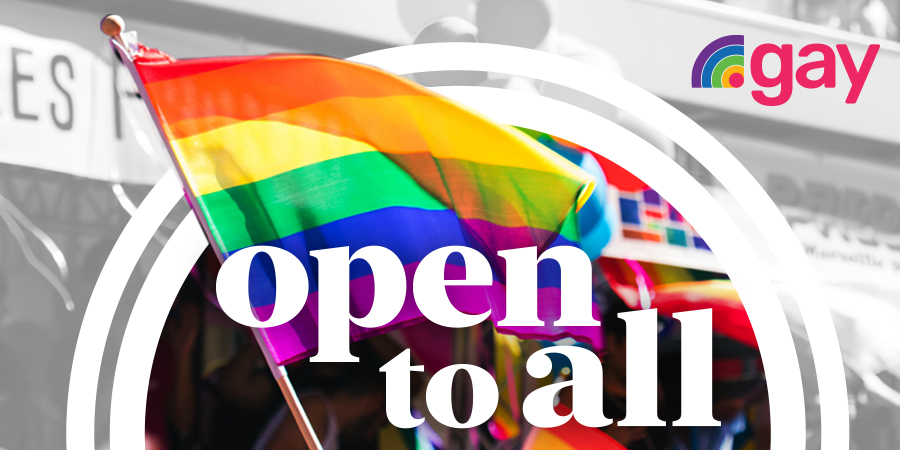 On September 16th of this very strange year, something actually good is happening (for once!), and we’re thrilled to be here for it. Top Level Design—the registry behind .design and .wiki—are giving LGBTQ individuals, communities, businesses, and allies the opportunity to register .gay domain names.

We at iwantmyname are keen to support the LGBTQ community and the inclusive vision of .gay, so we caught up with Logan Lynn, the Public Relations Director of .gay who wears many hats. He’s an LGBTQ and mental health activist, a storyteller, and a musician with 8 studio albums, 27 music videos, and countless collaborations, most recently touring with rock act Portugal. The Man.

iwantmyname: What have you been up to and how has this year been for you?

Logan Lynn: This year has been a rollercoaster for me, like it has been for so many people given the pandemic and global social uprising happening all around us. I have been really intentional about thinking about the situation we are all in right now as a portal we are moving through together — and I believe it’s up to us to create the world that awaits us on the other side of this. I’ve been leaning into this time to create, make things better where I can, help out — but also go easy on myself around the edges. 2020 is intense, friends! Self-care is having a big moment in my house.

iwantmyname: How has the conversation about LGBTQ culture evolved over the last few years?

LL: Well, just thinking about my own experience as an out, gay person in the world… I came out when I was 14. I’m 40 now… and A LOT has changed in that time. We have more ways of finding each other and connecting now as LGBTQ people. I’m so proud of how far we have come since I was a baby gay marching in my first Pride parade. As more and more LGBTQ people have stood up in their own truth and said “This is me. I’m a human being who matters,” I think we have seen major shifts in everything from policy to the pulpit. The fight is certainly not over by any means — a person only has to take a quick glance at their social media timelines to know that — but we have momentum now as a people that will never be stopped.

iwantmyname: How did you come across .gay and what motivated you to join the team?

LL: I first got involved with .gay back in 2013 when I was working with LGBTQ Centers in the Pacific Northwest and was a big supporter back when it was just a concept. As a public gay person in the entertainment industry for over 2 decades now, I have no shortage of experiences with online harassment and trolling. I’ve fought tech companies for years to change their policies around anti-LGBTQ hate speech and abuse. With .gay, I think we all saw an opportunity for me to bring that lived experience to the table to help fight for a safer, more supportive internet for people like me. I reject this idea of accepting that the internet is a dumpster fire of bigotry and humiliation and that, depending on what your personal or professional identity is, you just have no recourse for justice. With .gay, we’re operationalizing that sentiment. We know we can do better, so we’re going to.

iwantmyname: What has the early response to .gay been?

LL: It’s been really fun to partner with LGBTQ community leaders, beloved nonprofit organizations, pride festivals, gaylebrities and influencers, as well as the original gay icons who helped pave the way for .gay to be possible through years of struggle and bravery. We raised a lot of money for .gay’s beneficiaries GLAAD and CenterLink during our initial Sunrise phase and will be making another donation after we launch, with 20% of new registration going to those organizations moving forward. So beyond .gay being amazing for visibility, connection, and safety online, it also benefits LGBTQ people in the real world through vital community programs and services. The response has been inspiring, and every time a new .gay Early Adopter site comes online, I smile because the internet just got that much gayer, that much safer, that much more fabulous.

iwantmyname: What are the concerns the LGBTQ community shares about using the internet comfortably today?

LL: Everything LGBTQ people face out in the real world exists online. Bigotry, hate, social violence, actual violence, and abuse are things that we navigate in our lives across the world, no matter where we live, as gay and trans folks. This active struggle of ideals surrounding your identity online, the coordinated attacks on people’s lives, loves, and businesses, and tech companies just allowing it to manifest and grow creates a real feeling of danger. It’s traumatizing, and even if there is perhaps no immediate physical danger, that emotional danger takes its toll. At .gay, we want LGBTQ people to feel happy, healthy, loved, and celebrated and will accept nothing less.

iwantmyname: How do you expect .gay will be used by the LGBTQ community? Does it address the concerns mentioned above?

LL: The .gay Rights Protections anti-abuse policies in place are robust and will be enforced to the full extent possible. In a practical way, we address those concerns on .gay sites by taking a zero tolerance stance on anti-LGBTQ behavior on the platform.

As for how we expect LGBTQ people to use .gay, we are seeing that come to life through our .gay Early Adopters. We know that will continue to grow over time as more people adopt .gay sites as brand or personal assets. Currently we’re seeing LGBTQ community centers, nonprofit organizations like PFLAG and CenterLink, all bringing their .gay names to life, as well as out celebrities like George Takei and Billie Jean King, and LGBTQ owned and operated businesses and brands. Additionally, major brands like Atari are adopting .gay as a very clear signal that they care and stand with LGBTQ people as a company. We’re also seeing companies and organizations use .gay as a way of organizing their diversity, equity and inclusion efforts.

iwantmyname: Are you planning on building your own .gay website? What will you use it for?

LL: Yes! LoganLynn.gay is currently live and I’m working on launching a .gay site for my documentary on Revry TV, “Lead With Love”, which will be up and in the world here very soon.

iwantmyname: What motivated the team to donate 20% of all new .gay revenue towards LGBTQ non-profits?

LL: Our whole team and everyone involved wants to show up for LGBTQ people wherever we can in meaningful ways. We want to invest in these communities and everyone at .gay sees the brand as a catalyst for authentic connection and support. Visibility matters, as does providing financial support for the organizations and communities we serve/depend on to thrive. We’re here to help with both.

iwantmyname: How can .gay further awareness and inclusion? Where do you see .gay headed in the near future?

LL: Our whole creative campaign is about celebrating the depth and breadth of our LGBTQ communities. We partnered with Two Penguins Productions and out luminaries to create a web series called “The Library”, premiering on 9/16 — the day .gay launches to the world! Our goal is to create a space where anyone who comes across our show, website, or social media, is left with this feeling of knowing and loving LGBTQ people. If that’s the big takeaway from everything .gay does, we’ll all feel like we did what we set out to do.

iwantmyname: What do you think can make societies, and by extension, the internet more inclusive?

LL: At the center of inclusion is understanding. If you don’t know something or someone it’s easy to assign some caricature to their identity, but that separates people from their humanity. If you take the time to get to know who someone really is, and meet them where they are at, it’s impossible to see them as anything other than a human who deserves to be in the world. The more diversity we have, the stronger we are as a society, and the more we can learn from each other. With .gay, we can bring the beauty of LGBTQ people to the forefront in new, exciting ways. I’m excited to be part of it, and can’t wait for everyone to see what we’ve been up to!

.gay is open for pre-orders at iwantmyname and is available to all on the September 16